Last year was a crazy time for Real Estate in Waterloo Region. The massive run up in prices was a problem for everyone but sellers. Then the Wynne government brought in a tax that really cooled things off. But it’s been three quarters of a year since the tax, so where are things now? My 2018 Kitchener Waterloo housing market outlook points to a busy spring.

Current prices in Waterloo Region are up comfortably despite the tax measures of the Wynne government. 2017 last quarter prices for Waterloo Region for ‘detached’ and ‘all types’ were up 8.2% and 7.9% respectively in comparison to the end of 2016.

However, the gains across the region are quite uneven. Kitchener detached prices were up the most at 13.6%. The city of Waterloo’s detached performance came in last place at 1.9%. The latter figure isn’t entirely surprising due to the steep increases in prices seen in Waterloo last spring. 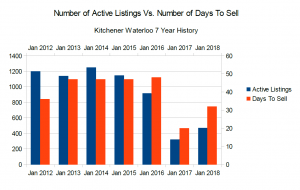 A look at January inventory over the past few years shows a repeat of last year relative to historic norms. Available units for sale averaged 1200 from 2012 to 2015. Inventory dropped a bit in 2016 and then saw very steep declines in 2017 repeated now in 2018. This could point to a very busy spring despite tight mortgage qualification rules and a bump in rates. Days on market figures for January 2018 are low at just over 30 days.

With everything going on with mortgages it’s likely that buyers from the GTA will continue to relocate here. Our healthy economic conditions and relatively affordable housing stock make Waterloo Region a viable choice for buyers from other areas.

If you’re thinking of moving, now is the time to plan your sale. It often takes a few weeks just to get a house ready let alone plan out where you’d like to go next. Having your house ready by mid March catches the start of the busy season which typically runs into June.