There’s no questioning the impact of the Wynne government’s foreign buyers tax on the Kitchener Waterloo housing market. Anecdotally, my colleagues and I noticed the market changing within the first few weeks of the April 20th announcement, and now we’ve got a solid month of data with the tax in place that clearly show some significant changes in our market.

One criteria that I really like to look at is the sold to list ratio. This measures how much above or below the listing price a property sells for. Historically this number averages in the mid 90% range, but last year saw some drastic changes to the ratio as buyer demand strengthened. The sold to list ratio for much of the market has been over 100% since last April and reached unheard of levels this spring. 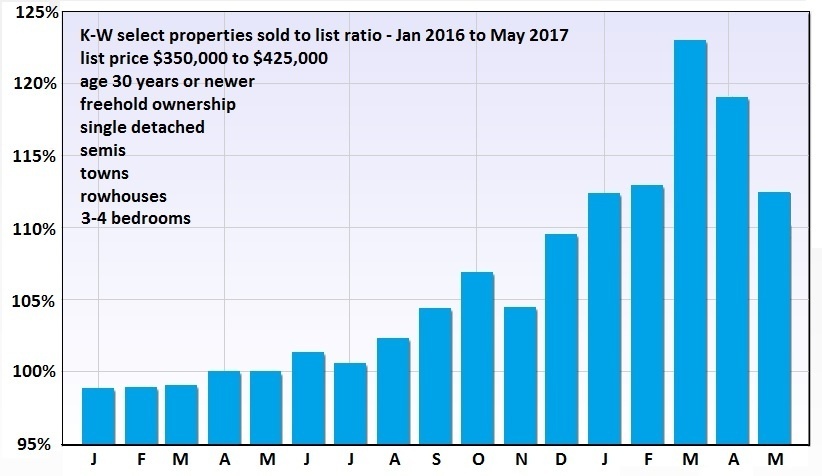 Bidding wars are directly related to a high sold to list ratio, driven chiefly by demand in excess of available supply despite record numbers of properties being sold.

The demand we’ve seen is fueled in part by foreign investment and speculation, but also by the general home buying public. The housing market of the past few years parallels the stock market in many ways, with buyer behaviour quite similar to that of investors not wanting to miss out on a hot stock.

This has been especially problematic in the starter home segment, with price appreciation each year easily exceeding wage growth or the ability to save for a bigger down-payment. The end result is more and more buyers entering the market pushing prices higher and higher in a never ending feedback loop.

The chief purpose of the Wynne government’s tax was to break this feedback loop and the foreign buyers tax was the simply the catalyst the market needed. The tax measures themselves don’t actually do that much as they are full of loopholes, but the psychological effect of the foreign buyers tax has been quite drastic and will hopefully bring some calm and stability back to our market.

As you can see from the chart (focused on the starter home segment in K-W) the trend towards historical sold to list ratios is well underway, with the past 30 days of listings selling for an average of 112% of list price. While this downward movement is obviously good news for buyers it may also be good news for sellers worried about not being able to find suitable property to purchase once they’ve sold their home!

If you think the numbers are really important (I think so too) and want to talk about them, you know who to call (or email)….

p.s. here are the details of the foreign buyers tax Financial Post