Another July has come and gone. The dog days of summer are usually a slow time but not this year. The July 2020 housing market is seeing record prices yet again for Waterloo Region and Guelph.

You might be wondering why this is happening year over year. There are several factors in play driving this market higher which I’ll touch on today. One of them is low inventory, meaning there’s a shortage of available and unsold homes. Any homes that are listed end up selling very quickly due to strong buyer demand. This competition drives prices upward especially if there are multiple offers. 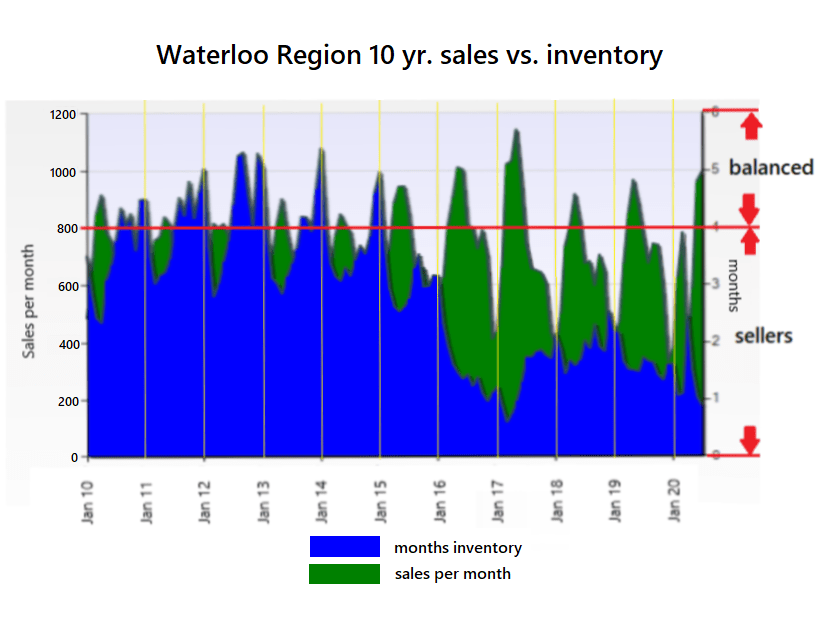 It’s not that fewer homes were sold over the last 5 years either. Sales volumes set a record all time high in 2016, with 2017 coming in only slightly lower. But even those years failed to put a dent in demand or prices. The Wynne foreign buyers tax in the spring of 2017 did next to nothing. Prices were impacted for about 6 months and were fully recovered by early next spring.

Inventories, instead of rising, stayed low during the last quarter of 2015. And they have remained low ever since. These inventory levels coincide perfectly with the exceptionally strong price increases we have seen in the last 5 years.

So where’s the demand coming from? Looking at the 10 year graph of sales vs. Waterloo Region’s population it’s pretty clear that the available housing stock for sale and our population growth are way out of balance. We have 74,000 more people living here compared to 2010 and we sold exactly 401 more homes in 2019 compared to 2010.

New housing is being built, just not enough to meet demand. There were 15,500 towns, semis and detached homes built in the last decade here in the region. And 13,977 apartment or apartment style condos were built as well.

I would bet that a huge chunk of the apartment type are student accommodations. Over 80,000 students attend the universities and Conestoga College. More than 30,000 need off campus housing. And there are only 18,000 purpose built student housing beds in the region.

This structural imbalance is a huge issue and isn’t helped at all by the historically low rates we’ve seen over the last decade. Mortgage rates in Canada, based on U.S. 10 year treasuries, were exceptionally low even at the start of the decade. Low rates were (and still are) making home ownership a real possibility for many buyers who would otherwise be unable to purchase property.

And housing prices grew at a moderate pace during the Conservatives’ tenure. The fact that rates were dropping year over year seemed to be having little impact. Things were good, people could buy homes.

It wasn’t until Trudeau’s 1st term that prices really look off, with mortgage rates falling even lower in his first 2 years. And so even more people could buy and they did. And prices rose, bringing even more buyers who were worried about missing out. Unfortunately the only meaningful action the feds took to dampen demand was the mortgage stress test in 2018. That measure was far too little too late and was countered anyway by other incentives to help buyers get a home.

And now we are faced with the pandemic. Sales activity fell off a cliff in the spring with prices impacted to the downside as well. But people are resilient and buying activity resumed fairly quickly, driving prices right back up going into the summer.

We sold more homes this July than last, which would be a good thing if inventories weren’t so low. 898 sales vs. 841 listing means we are now under one month’s supply of inventory. Last July we had 1346 listings by comparison. A lot of people who want to sell are clearly sitting this one out while the buying pressure continues nonstop.

The 2020 prices we are seeing are great if you are a home owner whether you are selling or not. But it’s definitely a tough situation to be in if you are a buyer, and especially if you are a first time buyer with little to no equity.

Nevertheless at some point the situation has to change in favour of buyers, but how much or how soon is hard to say. A recession induced by covid could do this but I wouldn’t want to bet one way or the other on one happening.

There’s a huge shortage of housing here in our region driven by immigration and insufficient housing stock which has been at least 10 years in the making. This is a structural situation that won’t reverse overnight and should keep upward pressure on prices no matter what the economy does.

Here’s the rest of the July data for the Region, the Tri-Cities and Guelph. Detached prices are up by $100,000 or more in each of the four cities compared earlier in 2020. And the price increases are simply massive compared to last year.