KITCHENER-WATERLOO, ON (November 3, 2016) ––Last month a total of 577 residential properties sold in Kitchener-Waterloo and area though the Multiple Listing System (MLS® System) of the Kitchener-Waterloo Association of REALTORS® (KWAR), an increase of 24.4 percent compared to October of 2015, and an all-time high for the month.

October’s sales included 359 single detached homes (up 18.9% compared to October 2015) and 130 condominium type units (up 28.7%) which include any property regardless of style (i.e. semis, townhomes, apartment, detached etc.). Sales also included 41 semi-detached homes (down 105 percent) and 39 freehold townhouses (up 2.6 percent).

Record breaking sales are also being tallied on a year-to-date basis with 5,818 residential transactions compared to 4,920 during the same period in 2015, representing an increase of 18.3 percent. Conversely, inventory levels are low with only 729 active residential listings on the market to the end of October, a decline of 11 percent compared to the previous month, and 53.9 percent below the same period last year.

Noting an increase in multiple offer situations, and homes selling for above asking price, Charlotte Zawada, president of the KWAR says: “A strong appetite for homeownership in Waterloo region combined with slimmer inventory levels means it’s still a sellers’ market.” 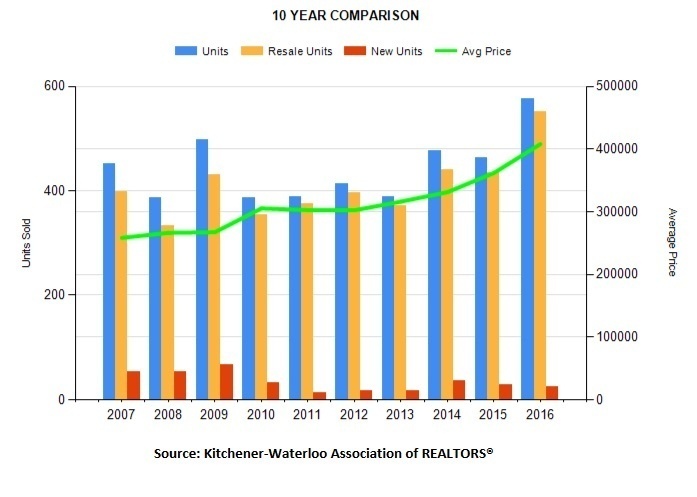 New measures by the federal government which introduced a mortgage rate “stress test” on all new insured mortgages took effect on October 17, 2016. While the overall impact of these changes is yet to be fully understood, President Zawada says “It is likely that some first-time homebuyers rushed to purchase prior to the stress test coming into effect.”