I hate being chicken. Bravery is a requirement in my sport. And fear stops me from doing things. Most of the time when I squeeze the coward levers too hard or simply roll too slow I just fall over. For many obstacles such as rock gardens or rooty climbs, momentum is your friend.

There are many places at the Hydrocut where fear intrudes. I don’t like this. There are several boulders I have never rolled. It’s being scared for sure but is also just me riding solo. It’s hard to try new stuff without relying on someone more skilled to lead the way.

And there are drops out there too, and they keep adding more.

I’ve had a love/hate relationship with drops for a quarter century. Wheelie drops off the patio at Ethels. Jumping down small stair cases. Launching myself off the smaller ones at the Hydrocut. 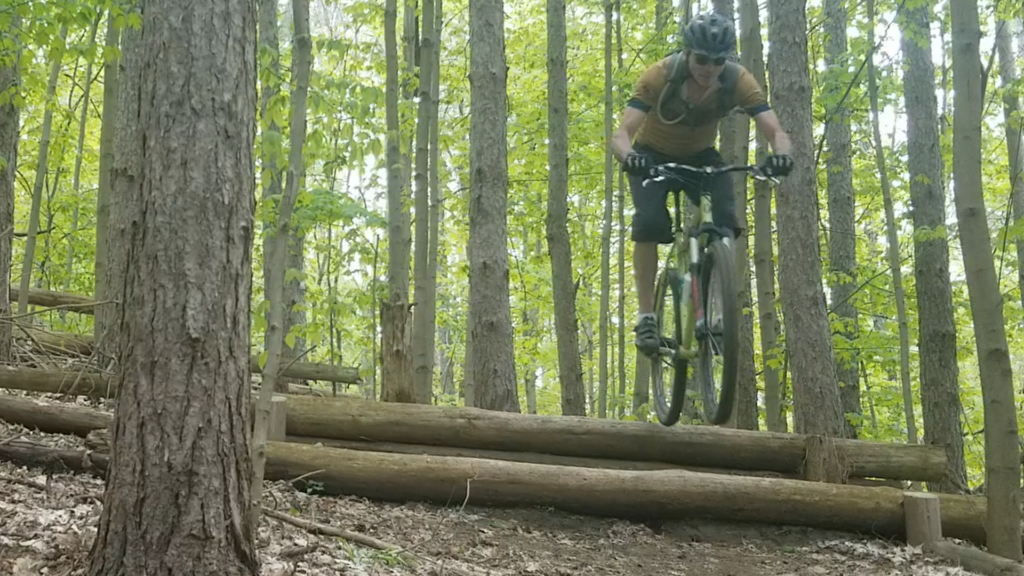 I’m not really going off anything high. A few feet at most. But I suffer from a lack of mastery. And there’s almost always that fear. I have to force myself to be brave. Pitching myself off the lip and not being able to see the landing is especially scary and also a huge rush. I think this is why I like it.

My lack of grace and precision does cause some unintended directional changes from time to time. Having my ride try to shoot me into the trees is not a good feeling. I’d guess I’m not landing straight or my bars are slightly turned. There’s often a terrifying second or so where I feel the front trying to wash due to beaking in the front. But I haven’t crashed from doing drops, not ever.

I was at the Hydrocut back to back the last two days. Perfect fall weather. And Adam’s Run has been calling me. I stayed away on day one out of fear but also due to rustiness. This trail scares me a lot. It’s evolved into something I don’t know. A few years back I could ride it easily. There are new drops. I’ve seen them on youtube, on facebook. They look intimidating, and require bravery I wasn’t sure I could muster up.

I roll through the first rock garden and stop, checking out the first small drop. I hear a rider coming who I’d been chatting with at the trail head. He rolls through perfectly, and I follow suit, catching up with him a few seconds later.

I’m not fast, he’s just waiting for me, to help, to be my guide. I know the trail mostly, but I’m unsure of where the new stuff is and how fast I need to hit it. We come around a corner and there it is, looking just like a boat dock jutting out into the abyss.

From video, I know the chicken line is the left. It’s what I’d planned on hitting. But my guide chucks it off the higher drop. He’s on a fully and I’m on my first home made frame, a hardtail with a 20 year old 80 mm fork. I follow him off anyway. 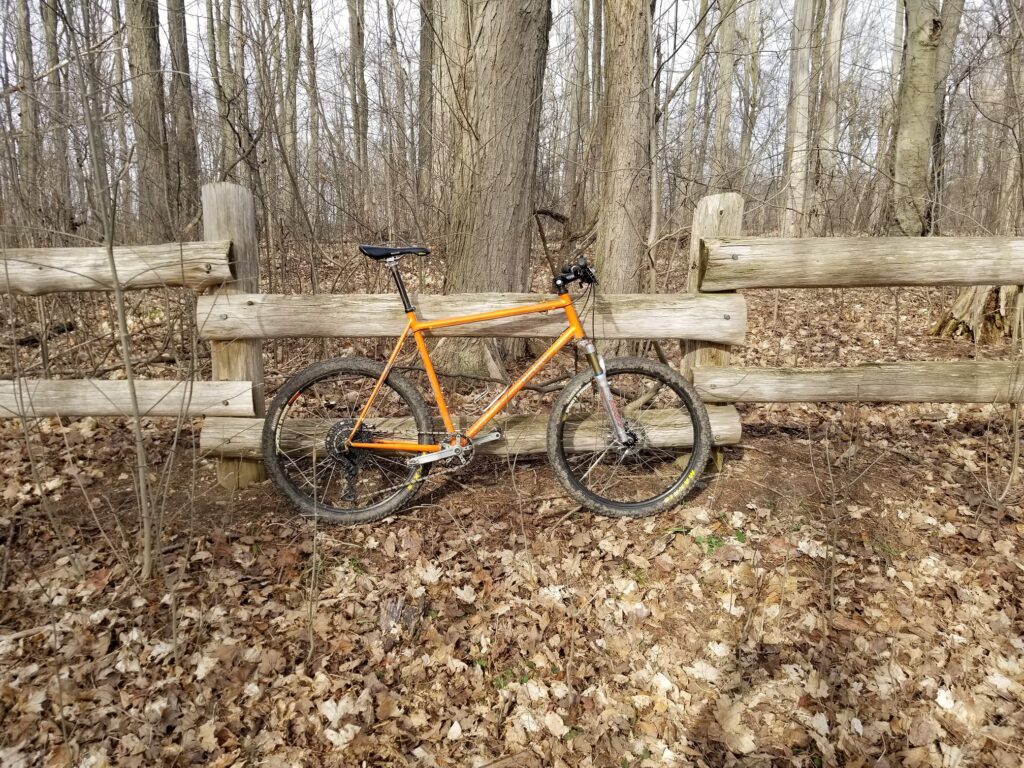 The ramp is only about 18 inches high but I go off with some decent speed. I land hard, several feet down the trail on the sloped transition. I haven’t dropped in that high ever. I’m stunned that I didn’t break my frame being I’ve been riding it with a cracked and repaired chainstay for twelve years now. I am elated that I had the courage to do this and that my bike did me solid.

A few minutes later I get a flat. I yell out to my guide and he carries on without me. I throw in a new tube and get going again. Next up is ‘the patio’. I saw this online as well and thought I’d be able to roll it. No such luck. I got too slow on the first level and ended up in the bushes. I’m way out of my comfort zone and I walk the rest, tail between my legs.

There are more drops of course and I’m feeling good about hitting them, buoyed by my earlier success. I come up on two, back to back. The first is easy so I roll it, but the second looks scary just because of the rocks it’s constructed from. I stop and take a peek (on foot) and realize it’s easy too.

Back up the hill I go. I see a kid I’d noticed earlier because he wasn’t wearing a helmet. I mention that the drops are easy as he goes whipping past. I hop on and follow him. Is he my next guide?

I launch off the first one and then the next. I had a bit of speed because I wanted to clear some rocks just past the lip of the drop. And I land perfectly but harder than what I was expecting. The landing is all I am focused on. Having tunnel vision and not looking up the trail is another of my flaws. Here’s a YouTube link to the screen shot of someone else doing the same set of drops starting at 2:36. 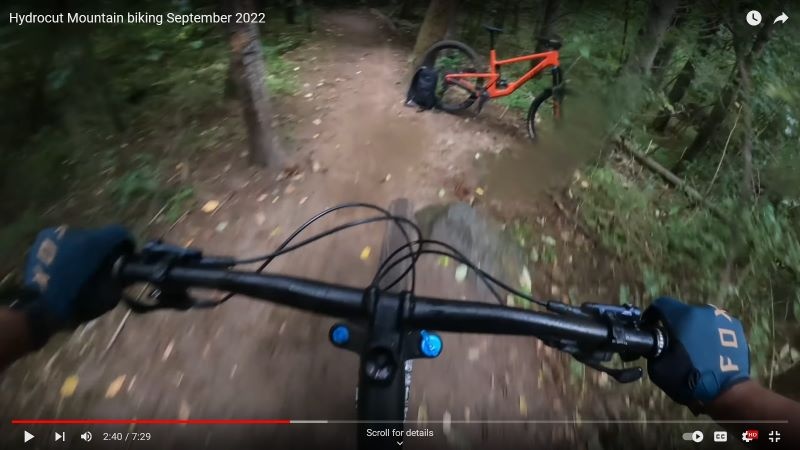 Unlike the guy in the screenshot I don’t notice the pumpkin sized rock until it’s too late. And ten feet beyond it is the tree where the orange bike is parked. I was lined up perfectly with both. I’d hit a tree last winter at jogging speed and I was limping for a month. But this time I was trucking along pretty good. It’s not very often that I think about death. This was one of those moments. ‘I’m &%$@ed’ sums it up.

The front wheel hits the rock and the next thing I am slammed into something, hard. Luckily it’s not the tree, not entirely. I’d hit the ground head first followed by my right shoulder. I don’t remember this sequence but it’s easy to see where the abrasions are looking in the mirror. The bike bounces off the tree, taking out big chunks of bark.

I don’t think I was knocked out but I wasn’t moving either. I’m all jumbled up lying face down in the dirt. My entire right arm from shoulder to finger tips was numb and tingling like crazy. My face hurt and my neck too. I feel wetness running down my face. A drop of something hits the dirt. My old eyes are too close and I can’t make out what it is.

Helmetless guy, having heard the commotion, yells ‘are you okay?’ a few times, and not hearing my reply returns and asks me again. I tell him I’m not sure, and ask him if I’m bleeding. By this time I’ve gotten back up, half staggering. I am rattled to the core. 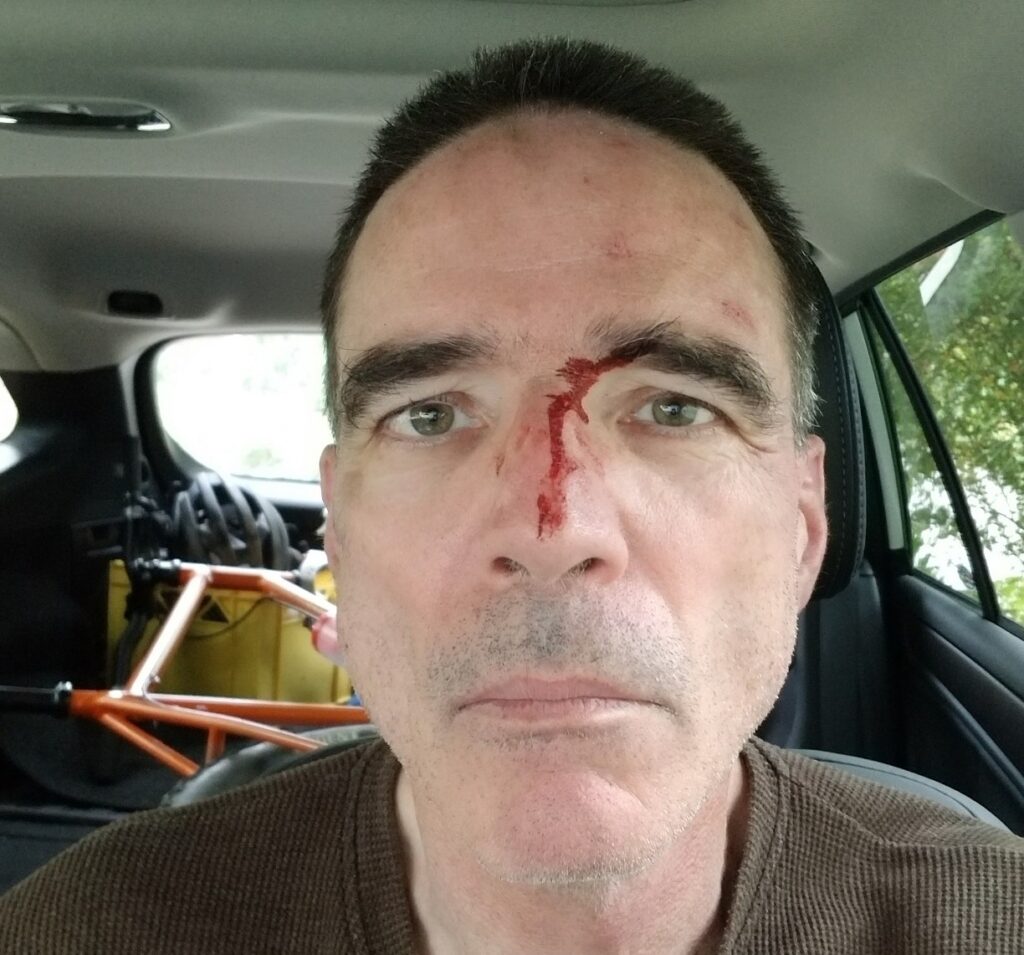 A true gent, the young guy rides out to the top of Adam’s Run with me. I thank him again and head back to my car on the doubletrack. I’ve had enough for the day.

My bike is fine and I am mostly but my helmet is done. It’s broken, not badly, but enough to know that I’d be in the hospital if I wasn’t wearing it. The blood was from my glasses getting smashed into my face when I hit. I have some scrapes and bruising on my forehead and some very minor abrasions on my right shoulder and leg.

I think I came pretty close to breaking my neck. My neck is sore and I’ve lost range of motion overnight while I slept. My spine between my shoulder blades is also tender. My daughter bugged me to call the doc which I did. That got me nowhere because it was Saturday so I called Telehealth Ontario. It’s been more than 12 hours and I am still waiting for an on call nurse to get back to me.

Dodged a bullet and another tree, yet again. Still processing this. Is it crazy I still want to drop off stuff?